It's been some time since I have posted so I thought this might be a good one.  It was a weekend of the Mont Blanc Marathon so a great time to go check out CahLi's investment in his future.
I took off the Friday in oder to take the train to GVA and Matthew was kind enough to pick me up in his beast of a Land Rover.  Benno came in later that eve as he made the giant effort of flying to GVA, getting to Verbier then driving down from Verbs.  Hugely appreciated and great to see him. 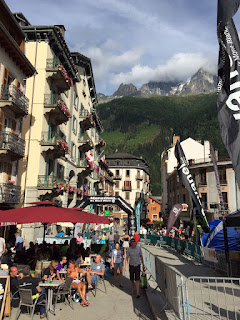 Well, I figured since we were in chamonix - The center of outdoor activity in the french alpes that a bit of mtn biking should be in the cards and Cals had already taken care of logistics.

We had a terrifc ride if not somewhat technical!

Then to fuel up for the 10km the following day we stopped by Tom Teague's home for a wonderful steak and pasta dinner.  And when it became dark we all were amazied at the 80km runners coming down off the  Mont Blanc in a line of headlamps.  Something quite beautiful about the human condition when watching something like that.


Next day as Cals went off to run a vertical kilometer, Ben and Noshow headed off for the 10km with 1498 other folks which while difficult was great fun as Mr. and Mrs. Calner were there to show support taking pictures as well...  While Ben was setting a new course record for old guys, Noshow was dieseling along huffing and puffing and the water the Sharkbite provided before the finish was enough to see him through... 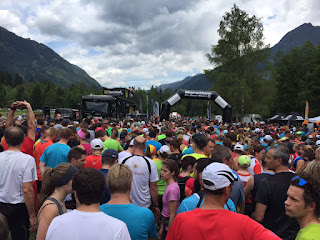 And so went the day of fun and sun and athletics bodies.  The sunday we decided to attack the vertical kilometer and as we began all nice, Ben soon decided he had his eye on some New Zealander babe who passed us and soon left NoSHow and cahli in the dust,.  Noshow suffered and Cahli was kind enough to wait at certain rest stops on the way up!
We were treated to a nice view from the top where Cahli and Ben discussed...no, not the way to world peace, more likely it was how firm so and so's derriere was.....
Twas a lovely weekend and one to remember with good buddies.  The only regret was there weren't more of us together..  Stay fit boys.  NS

Nicely done. Good to see a post from you.