JFG 'er on the MTB-er

Rider Sharkbite here, currently living life horizontally with a bad L4/L5 disc situation. So, time to update the blog with a photo montage from August's Grand Raid race, courtesy of some crazy cat who set up automatic cameras a few places along the route, then posted the results online.

Friday, Aug 20. Riders Howe and Lone Wolf tied up with spousal commitments. Sharker decides to go for it and get some Grand Raid action. Drive down to Sion for pre-race registration and tech inspection. (Mountain bike hanging out the back of Howe's old Z3 beemer, using Howe's patented bungee cord/old cushion/plastic bag bike transport "system". Half way there the engine warning light comes on. Howe's response on the phone: "Just keep it under 4ooo rpm." ...Words to live by. Ranch wisdom.)

Saturday, Aug 21. Awesome local and all-round problem-solving lady, Karen, drives me to Heremence at 4am in her station wagon for the 6am start time. Winding up the valley road in the blackness. Get to a long line of stopped/parked cars, blocking road. Time to get geared up and strike out on the bike to get to the start area.

1 hour later, race number on, banana down the hatch, several local bushes well hydrated, and with sunscreen in all the key places...Sharkbite rolls out in a dim sunrise with a few hundred other crazy mofos. A day of long, long dirt track climbing and descending begins, with a little mud and single track excitement along the way. 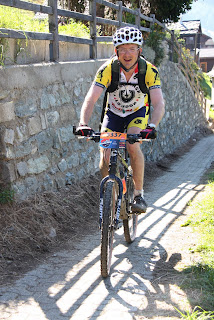 Top of the first long climb, passing through the footpaths of Madelon, a high altitude hamlet. Locals out on their doorsteps, cheering and clapping every rider as they pass through 4 foot wide village pathways. Awesome.


Next stop, alpine singletrack, where gnarly wiping-out is a distinct possibility. Manage to get through unscathed...and descend down into Evolene.


A pattern becomes evident: I steam by panting humanoids continuously on the ascents (keeping it real on the ten-year-old Cannondale F800 hardtail). Then, on the descents, the chubb-meisters come flying past again, on their hi-tech full-suss machines.

There is only one solution...plenty more climbing to come, so time to whip them all on the next ascents.

Throw down another 1200 metres vertical or so of solid climbing...and what do I get for it? A nice 1.5km or so of unrideable cowpath leading to steep rock-scree mountainside path. Which has to be scrambled up: pushing, carrying, throwing the bike...whatever you can do. 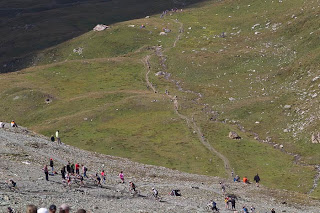 View down the slope of the "climb it on foot" section. 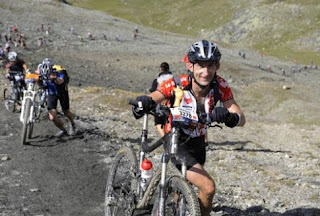 Photo demonstrates the workload involved pretty nicely...unclear why this dude is smiling. 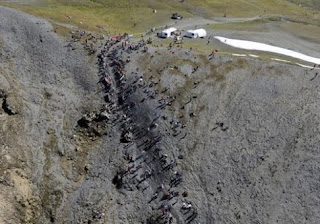 Overhead view of the final stages of the climb on foot. Crowds lining the path on either side screaming and cheering. All of a sudden I hear some dudes calling out in French to clear the path, and I hear a trials motocross motorbike blasting up this crazy incline. Turns out it is the first of the pro riders who started in Verbier, with a few dedicated motocross nutbars driving the course with them to clear the route as they go. The pro guys had it down, too: they had little ropes on their bikes so they could sling their bike on their back as they pounded up the slope.

View from the top of the 1.5km scramble climb. 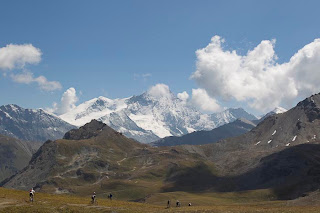 And the descent that follows. 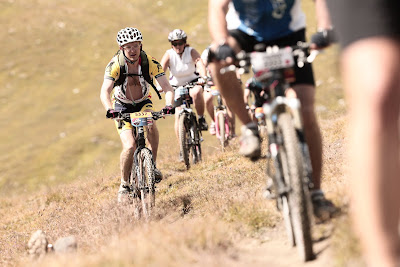 Catching up to some slow-manoids from the short course start. 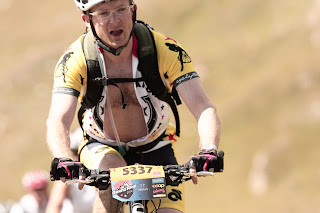 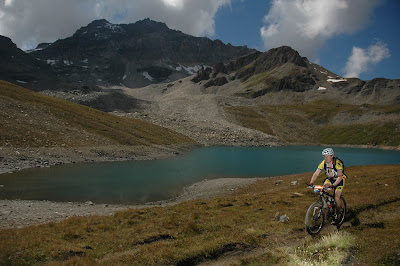 Unfortunately, it soon became apparent that the climbing was not over. We crossed the high alpine saddle and linked to a dirt track...heading upwards for another 200m or so of vertical to summit a final col.

Approaching 2800m altitude. Not a pleasant gradient. Rough dirt and rock surface. The RANCH member depicted in this photo can be spotted by the fact that he is RIDING, not walking, the bicycle. 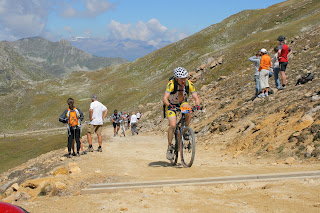 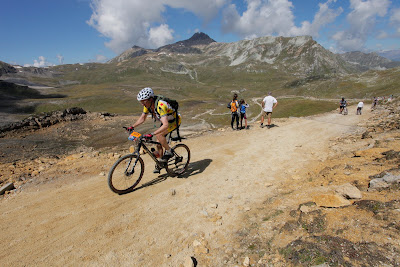 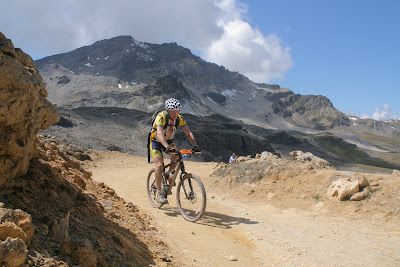 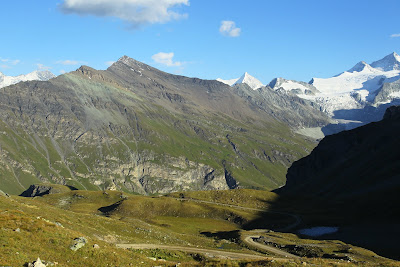 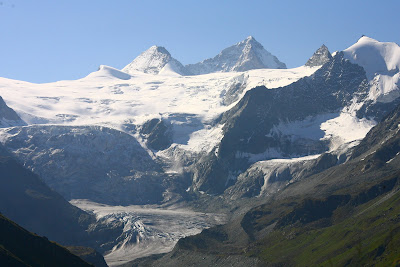 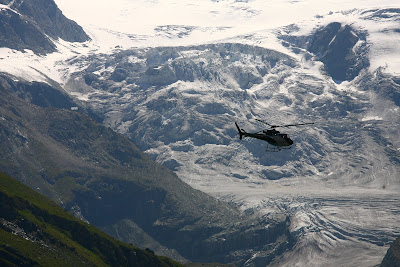 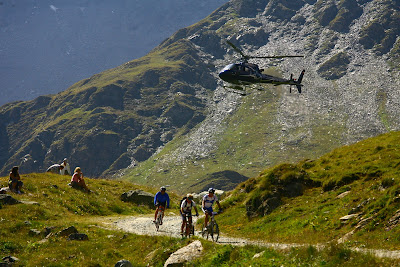 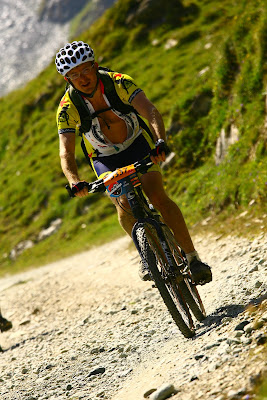 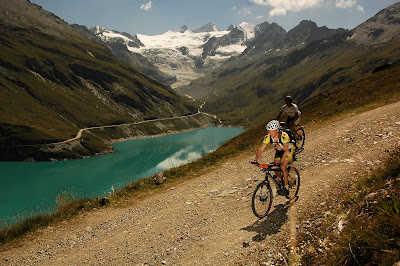 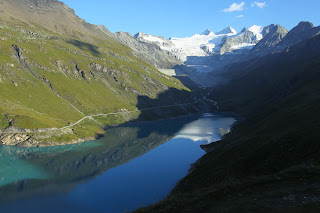 Now a lot of people ask me, "Hey 'Bite, how is that you bust out 3000m of vertical climbing and descending on a 10 year old hardtail with about 50mm of front suspension travel...and then bust across rocky mountain stream crossings with such needlepoint precision accuracy?" 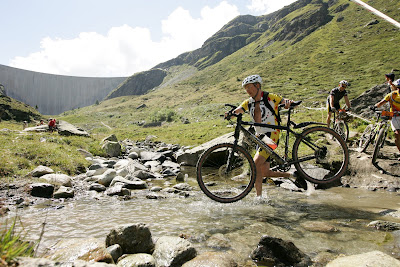 (Do you actually think I would be crazy enough to try and ride across that kind of crap?) 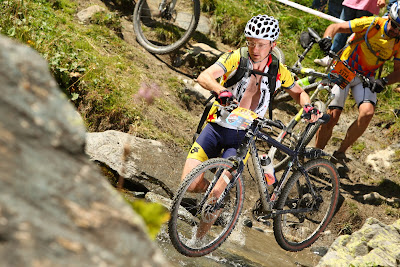 Busting it into the finish line... 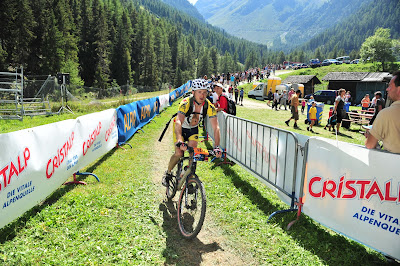 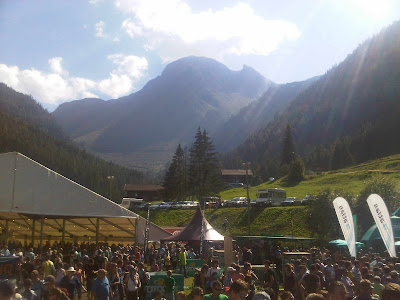 View back up the valley. The course came over the right hand side of the far ridgeline. 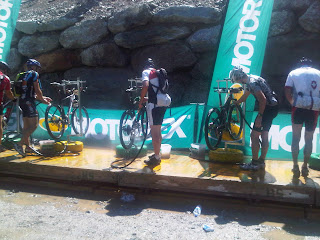 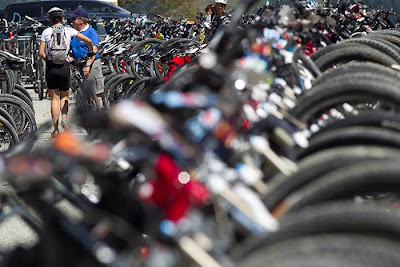 After all that, I grabbed some grub, got on the bus service back to Verbier and started to get mentally prepared for...doing absolutely nothing for several days. All in all, an excellent outing, albeit a race with ample opportunity for body-trashing if you are not careful. The Ranch, however, is always careful.

And SO totally not anywhere near as fast as the Swiss and French MTB speed-meisters over the Heremence distance: SharkBite. 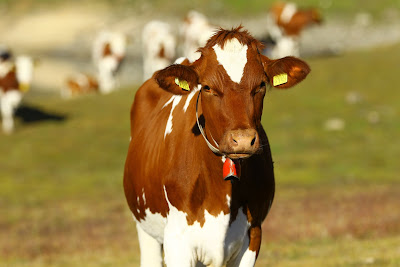