The Yan - reflecting on the history of the ranch 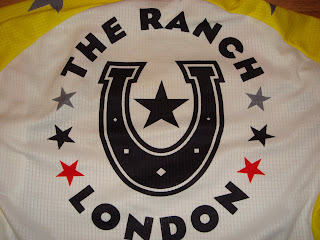 Some of you might not be completely aware of the genisis of the ranch. As much rumour abounds - i thought it time to put facts straight. The ranch was the brainchild of Roy the Yan in the living room of 151 drayton gardens - a south kensington home to 5 young bankers - which became known amongst those in the know as "the ranch". Not sure why "the ranch" perhaps two of the fellows - mark begert (texas) and tom pitts (alberta) hailed from those places associated with pick up trucks and middle teeth.

Roy Yan (critirider) was a competitive cyclist as a junior living in philadelphia. Later he rode for the westpoint millitary academy (ARMY) and is still found racing in assorted criteriums across the east coast. Maintaining a strict cycling regimen in London he introduced the sport to the good men of the ranch in the late 90's - as an off season leg strengthening exercise. Off season as the men of the ranch were found skiing each and every weekend and were looking to optimise their ski season free from the ritual month of aches and pains.

To the casual observer - the ranch was soon mistaken for a soho bathhouse - as men were seen semi clothed with a full lather of sweat - pounding away at compu- trainers and bikes on rollers all in full view from the passers by on old brompton road. Not suprsingly with a bunch of AA personalities everything was a competition weather it be wattage, heart rate, or weight and progress was made. The mantra of cycling soon was accepted and endorsed as:

"To be a cyclist is to be a student of pain....at cycling's core lies pain, hard and bitter as the pit inside a juicy peach. It doesn't matter if you're sprinting for an Olympic medal, a town sign, a trailhead, or the rest stop with the homemade brownies. If you never confront pain, you're missing the essence of the sport. Without pain, there's no adversity. Without adversity, no challenge. Without challenge, no improvement. No improvement, no sense of accomplishment and no deep-down joy. Might as well be playing Tiddly-Winks."

It comes with little suprise that while 151 drayton gardens survived for 6 years - eventually girlfriends ultimatums, job transfers, and the realization that one should start living more adult like - the fellows moved out. But the cycling continued and new recruits were swept up with no real thesis beyond finding a few more willing guys to ride saturday mornings. An Argentine contingent led by Easy-E was exploring cycling and stumbled into the fray and suddenly with ridercrespo and riderchichi a group was re-emerging. Staple on a couple of colorado transplants (riderturbo) and the lone wolf - add some veteran leadership (riderhowe) some boston old money (ridernoshow), boston new money (ridercali) and a hersute terrone (riderzinni) - and the ranch cycling team was born.

Fellowship amongst like minded men in the midst of all the nonsense that bigger money and temptations can bring - sets one on a steady path. The acceptance of suffering is best done with some support from your pals - so the ranch started to take itself a bit more seriously - and results started to show. Everybody kinda had their own goals - whether it be a sub 20 loop of richmond park, losing a few pounds, or dropping one of your pals who was needling you all week on the subida de la muerte in turville. Remembering at base the ranch was a bunch of adult men trying hold off middle aged expansion - and looking to find the discipline to just be plain healthier. The 4 or 5 races in europe each year were a bonus and served to pause - a pause to see wonderful parts of the continent - a pause at the starting line to reflect on ones training and state of being - and a pause to be aware enough that these memories are going to be stored away and reflected on and replayed over the years to come. The catch all phrase for 2009 is make it yours - a somewhat selfish "only child" line - but i think the point is to maintain a balance in all things - which is stressed and applauded each day with each rancher holding the other to task.

So the ranch has shaped up into a core bunch of guys that have developed into pretty good weekend cyclists. They maintain enough perspective that they can laugh at themselves when they drop a chain, or get passed by a bunch of girls on pink pinarellos. A number of ranchers have dispatched to different countries - but still maintain daily contact over bloomberg chat and post the odd blog to reaffirm their membership. They became virtual friends with a tri-athelete in colorado, a stem cell researcher in frankfurt, and were cited in the cyclopassion bike calander. The site meter shows 6,000 visits with 12,000 page views. All of this - its fun to think - is the result of a hedge fund manager from philadelphia - who found himself in London - living with a few numbnuts - and said - lets see if some of these muppets can learn to ride.
Posted by riderpitts at 09:04 7 comments: