man i love my helmet 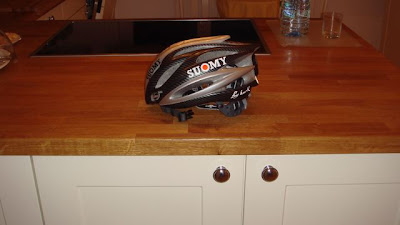 Never really considered myself a gear head - this despite the fact when i peak at my bike collection spread throughout europe i count 4 roadies and 2 mt bikes. I have found myself more restrained when it comes to skiing although ski stuff kinda piles up on you which can give a false impression. No - anybody who says he knows me - whould say i am the anti consumption guy as my hobby is squarely set as saving money. The last bet i had was a challenge that i couldnt live on 20 pounds for the week. The poor dope that took the other side of that is now 50 quid lighter. Its not that i consider myself so crass as to be thought of as cheap - rather frugal - as that has a gentler ring to it.

Which brings me to the reason for the post - anybody who read our account of the drilander will recall that this writer hammered his head on a descent coming out injury free and praising rudy project helmets. In fact i wrote rudy project telling them how much i appreciated a quality product - and they sent me a new one - for free. Now given my frugal ways - i kinda love free stuff - problem is - the next generation helmet doesnt fit - it sits at an acute angle on my bean and gives off a bubble head effect. It also doesnt vent as well as i would like with the padding being a bit thin and ackwardly placed. I also happened to notice that their helmets are now being sold at commuter bike shops which is never cool.

So knowing the above - i turned my back on good old rudy project and purchased an italian made suomy. I first noticed these helmets in last years gimondi gran fondo - as they had a booth there. So filing that data point - and tiring of staying faithful to a sub optimal helmet - i went straight to this years booth - and bought one. Last years model of course as i got a 40 euro discount - so my fellow riders dont suddenly get the feeling that im acting out of character. To varify my choice in lids - ridercali - who i count as one of the few hedge fund stars in my camp of frugality - lifted one as well. Riding this weekend in the Taunas outside of frankfurt - the suomy performed extremely well. I was - i have to admit - a bit disappointed that riderSTEMCELL (the DR Pierre Debs) - who while calling himself a mtbike marathoner - rips on a road bike - and who caught me on a climb - NEVER - made mention of the suomy - but i did notice him admiring it - in the same way as a ninth grader covets the fully developed 12 grader hawtie - and sits in silent reverence.
Posted by riderpitts at 08:16 6 comments: