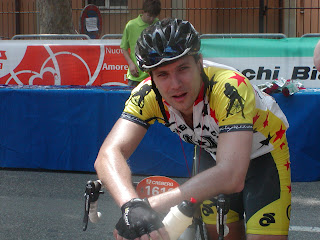 who out there figures this beaten down hombre is going to lead the ranch in france - cause - those of you in the know - know we got spots - so register asap through eazy-e. photo - riderchichi - bergamo may 07
Posted by riderpitts at 15:05 3 comments:

RidersRanch found there way onto the grid - which owing to early prep - meant numbers 600-2,500 weazeled their way ahead of numbers 2,501 to 6,000. The new jerseys were broken out with only RiderChiChi opting for the ranchbooties. The start moved suprisingly well with a look at the clock showed 2 minutes to cross the start line. As in Italy its all about form and design- the most obscure of italian frame builders had representation somewhere. Ranch looked strong and stayed strong with 5 opting for the grand fondo (165k) and 2 for the short(95.7). RiderTurbo being a sprint triathalon guy and RiderHowe (dont mention my aching back) both turned it on early and cruised away on their respective course. The other 5 chums preceded to hack it out with the other teams on the big one. The Route can be charcterized by a series of long grindy hills, choppy decents, extraordinary panorama's with deep dark walled canyons and high alpine plateaus. For the most part the course was traffic free - well marked with metrics of all climbs clearly posted. One thing that struck me was the freshness of the air - London does bad stuff on that cord - but the damp spring air proved a real energy booster. Having just completed a race in Austria - the Riders stood out as a lot more friendly and talkative en route. Save for one or two moments - the race was remarkably free from attitude with numbers of different groups spending time pulling. The first couple climbs were easily manageable consistent grades of 4-6%. Feed stations were full of stuff - and Ranchers were able to transition in and out well with Eazy-E and RiderCali being the mules for banana's and refilling bottles. We found the tempo strong on the flats with consistent late 30's early 40's - kph - to be had with most guys sharing the load. The climbs were more of a free-for-all and here we were a little unsure of the course. The 20k climb contained a false summit - but was very doable staying in the 21 ring for most. Coming out of that decent we had a strong flat ride where just as we were finding our pace - brought us to a 9.5k climb which was a dandy. I dont think i have suffered that much on a climb - through cramps and exhaustion - but the team really held together and we summited together. At that stage of the race to put a consistent 7% climb with stretches of 10-12% is just mean - dont think i left my bail out gear which is a 26 and with a compact. Noticing riders wrapped in blankets at the side of the road - this climb has its own death toll. The decent was rough which i for one struggled with - but the ranch found itself together for the last 30k into bergamo. It was quite a site as our peleton showed the ranch train all at the front pulling into the town. With big engine chichi pounding away we cruised with that feeling of a job well done. On that day - we won.
Posted by riderpitts at 10:35 4 comments: 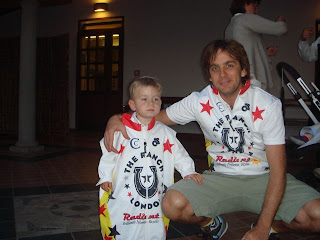 An incedible weekend by every measure. The Ranch trickled into bergamo friday and saturday morning to big blue, +28 temp, and 6,000 cyclists. Rider Mamma was found sneaking around the registration stand pleading that insurance shouldnt matter for a 7 month pregnant woman. As RiderHowe's registration never made it through - he quickly seized the opportunity to impersonate ridercrespo, london's newest millionaire, (who was doing what new millionaire's do - and didnt make the trip) - and picked up his starting pack. RiderSammy texted that he felt safer in the comfortable confines of his girlfriends bath robe and slippers - and decided to hit the snooze button. RiderZinni and Rider Schlem were both forced back due to health reasons in one case and two inches of dust on his bike in RiderSchlem's case. So the stage was set for the core of ranchcycling - RiderEazy-E, RiderTurbo, Rider-i got to find a cooler name- Josh, RiderChichi, RiderHowe, RiderCali, and RiderPitts. A great dinner was enjoyed by all Sat night with kids, begamo argentine expats, and a wonderful view of the rolling northern pre-alp. Who says Europe is expensive - when the bill for 13 people came out to a whopping 208 euro. Riders called it a night early, and prepared for the 6:15a.m start the next day. Picture of RiderEmilian and fan favorite Eazy-E.
Posted by riderpitts at 09:58 1 comment: