man down - Crespo battles through surgery 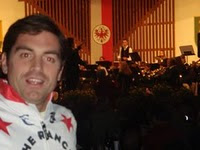 i feel really bad about all of this. we were riding in richmond park. finishing the first lap. probably 200meters from the main gate that we always enter traveling clockwise. i felt my back wheel start to wobble and it was crespo's wheel pushing into mine. i shouted to him and then looked over my shoulder just in the moment to see him hitting the wooden 4x4 road markers that they have all around the park. I didn't actually see why our bikes hit in the first place or how it happened or even how he came off the bike. i just remember seeing the actual impact of the fall. i knew it was going to be really bad because i saw him hit the wooden block but i never imagined it would be this serious. he was struggling to breath. i thought probably a combination of the wind being knocked out of him and maybe even a punctured lung. the guy was in so much pain and maybe even shock. he kept opening and closing his eyes, and rolling back and forth on the ground. we tried to calm him down and get him to take short small breaths so it didn't hurt as much to breath. it was awful to see anyone like that but especially the guy who's door you knocked on an hour earlier to go a ride. about 15 or 20 other riders stopped. all offering help. neither of us had a phone so one rider called the ambulance for us and was describing what happened. another rider on a mountain bike who we had passed about 10seconds before saw the entire event unfold and was helpful in explaining to the medics how exactly crespo landed. his name was Max. he took off his fleece and put it over crespo since it was cold out and neither of us had a jacket. another rider offered to lend me money for a taxi in case we couldn't fit both bikes in the ambulance.. i felt very emotional seeing how kind and concerned people can be for complete strangers in distress. we live in big cities where most of us do not even know our neighbors and we all exist 12hrs + a day in the hard world of finance where often the human sympathy element is nonexistent. people are generally good and make the right decisions. the ambulance took about 7minutes to get to us from the time of impact. crespo wanted to go to chelsea westminster hospital and insisted 2 or 3 times when both of the medics questioned his choice (it is by no means the closest hospital to richmond). i think he wanted to there because that is where Lu is going to have their 3rd child in a few weeks but I am not sure. it took about 15minutes in the ambulance to get to the hospital but for crespo it felt like an hour. he asked me every 2 minutes 'cuanto falta?' how much longer? and i tried to keep giving him an honest answer. i squeezed his right shoulder during the ride in the ambulance so that he knew i was there with him. and about half way into the ride he says. 'hey my shoulder hurts too' i just thought, great, kid crashes his bike and you think you are helping by letting him know you are with him by squeezing his shoulder, and in reality you are actually hurting him more!! it was the other shoulder that bother him. apparently he hit that on impact as well. we arrived at A&E and they wouldn't allow me to enter with the bikes so i took a cab to crespo's house. dropped off his bike with Lu and explained what happened. she gave me his phone and clothes to take back to him as crespo told me to tell her not to bother to come down to the hospital. i think he probably thought what i was thinking... few broken ribs, lot of pain, but no major surgery would be required. man where we wrong. i took the taxi home and dropped off my bike and threw on some shorts and went back to the hospital with carmen. i wasn't going to even go home but i told carmen that i would be home from the ride at 900am latest and now it was already 10am. she was worried and i had no way to call her since i left my phone at home (never will do that again). we went back to the hospital and got there around 1030. crespo was getting a scan when we got there so we couldn't see him right away. about 10mins later Lu showed up with the kids. crespo wanted to see her and had the drs. call her. i took the kids for a pizza to get them out of the hospital for an hour. when we came back we found out that he needed the operation and that he was getting taken in right away to the OR. Max Galland (good friend of crespos) showed up and took the kids for the rest of the afternoon and Lu waited while crespo had the operation.

i am going back over to see him now but unfortunately I am taking off for a week later this afternoon. if any of you guys are in london please go see the guy. he should be in the hospital for at least a week and this was a major operation. he was really out of it yesterday due to all the painkillers but I think he should be more alert today/tomorrow.
Posted by riderpitts at 10:42 23 comments: