Only 2 members of the ranch made the trek to the heart of the black forest for the triberg 180k radmarathon. The town ran a professional race the day before where high road dominated the local favorites gerolsteiner. 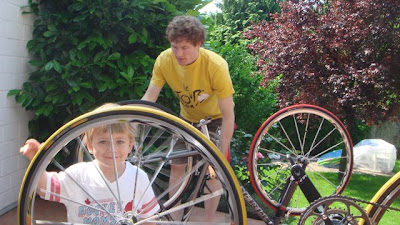 Relatively small field for such a hot bed of cycling - ridercali and pitts lined up in the drizzle amongst 236 mostly local germans - swiss - and austrians. Talking with guys before - during and after - it became apparent that a lot of the riders were using the race as a tune up before the drilander - as were we. The event was well organised 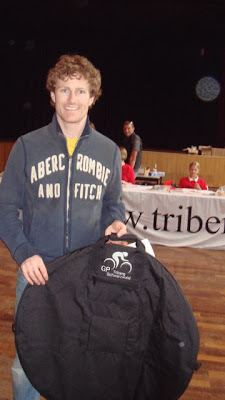 with well spaced and thoughtful feed stations. The first climb starts after about 30k which we rolled to in the leading group. 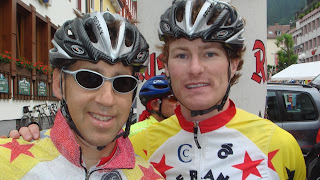 There was definately a hint of "gorillas in the mist" as we climbed into the clouds with visability no better than 10m ahead - so riders would sort of fade in and out like the headless horseman in a scooby doo cartoon. Kandel is an 11k climb through ancient forest into tall pines. Rider easy-e and i rode it in another race (surm - 230k 4000m) a couple years ago - and it is sneaky hard - partly because you are never quite sure whre you are on the climb as there is dense forest all the way up. With all the humidity in the air the oxygen content couldnt have been better nor fresher. The descent was a cold one - with the field spreading post climb. The two ranchers settled into a group of about 10 for the second climb which had some sections of 12%. Again the field thinned and rolling in the flats there was maybe 6 of us with one poor bugger doing most of the pulling. When we hit km110 there was actually just ridercali and myself laboring up a short but consistent 11% climb when two riders from a well known team just outside of frankfurt caught us - hesitated - and decided 4 is better than 2 - and we settled into the next 70k together. Both marcel and jurgen had very "live legs" and the 3 three of us were forced to live through more pain when jurgen was dictating the pace. 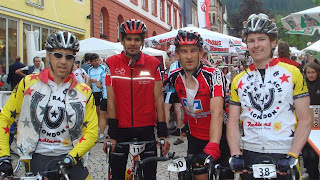 Cramping was the theme from km150-60 where i jammed every bit of liquid into my gullet - and lived to grab a litre of coke at the final feed station. Calner and i polished it off between ourselves - with the result of me getting a second lease on life and calner getting a serious bout of nausia. Summitting the final climb at km167 we coasted down to the finish with calner pulling up for the old man pitts to cross together. Number 67 and 68 out of 236 - no grease, strong field. Sitting down to post race musings - baby anouk gave her own verdict below. 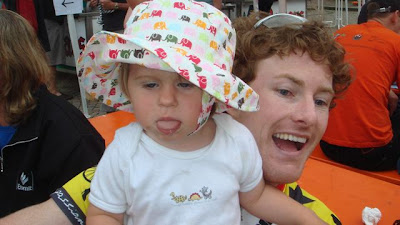 Posted by riderpitts at 08:32 No comments: