This past Monday, memorial day in the U.S. and bank holiday in Europe, Ridermama and 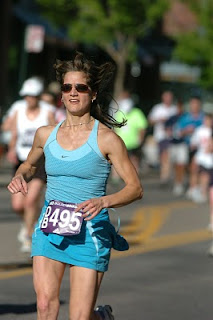 Billed as the largest fully timed road race in the U.S., Mama and Turbo represented the Ranch undercover and joined 54000 of their closest friends for the 6.2 mile run through Turbo's hometown of Boulder, Colorado.

Despite not having run more than 4 miles since the birth of Riderzoe some three years ago, Mama was ripped and ready and clipped a respectable pace that included a 1-2 minute courtesy stop with Riderzoe and Grandma spectating on course. Turbo provided run pacing and interval splits while Mama led the two bobbing and weaving through the crowd of runners. 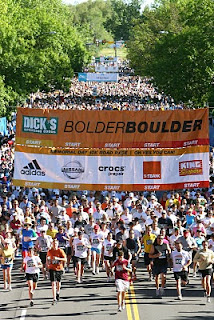 Overall time was a respectable 51 minutes and change at an oxygen-deprived altitude of 5280 feet where the air was thin, the sun strong and the mountains beautiful. 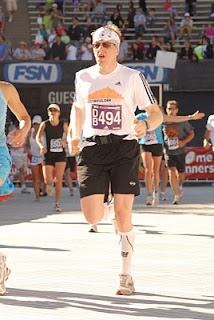 Mama placed 34th out of 622 women in her age category, citizen's race, and Turbo 130th out of 557 donning compression socks and the misunderstood white bandanna that has become the enigma of Ranch West Coast style despite fitting in the L.A. gang banger scene.
Posted by riderturbo at 00:45 4 comments: