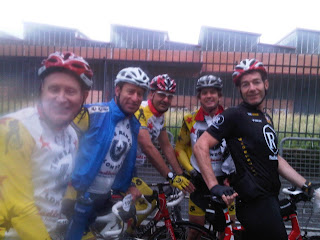 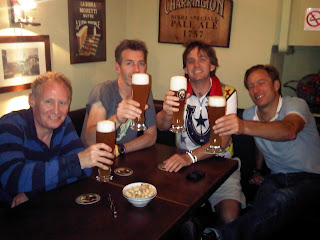 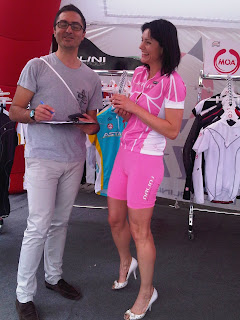 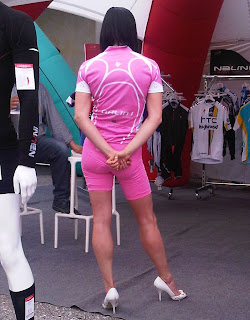 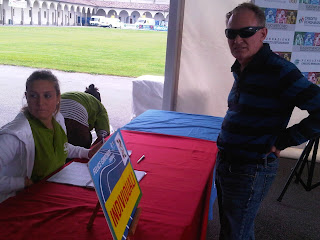 So there it was. Another gathering of the Ranch for a festive Felice Gimondi. Ranch riders descended from Vienna, London, and Verbier, all prepared for victory. Rider Howe and Rider NewGuy (Kevin Connors) rolled in to Bergamo having treked 3.5hrs from Verbier. Rider Zinni arrived from Vienna. Rider EzE and Rider Reido in from London.

Registration required much negotiation, as most of us did not send in our Doctor's notes, and Rider Howe was posing as Rider Cahli. In the end, after signifcant negotiation with Race Officials, all of whom appeared to wear pink, Rider Zinni was able to use his local toung to lash out a solution with the Lead Race Official who had ridden a set of fabulous camel toes into the race HQ.

Moving onto pre-race preparations, the Ranch found savory local grub at a fine establishment in the center of La Cita Alta. Local wine and beer was happily consumed to wash down the high carbo pasta intake. Rider Reido was successful to leave multiple gaseous green cloud bombs to stimulate conversation. When asked has he been successful bringing his new girlfriend to blow her load, he responded with conviction, "oooh yeah, with my hand". Marveling in his manhood's (lack of) notable accomplishments, Rider EzE revealed his dinner fixation of an image of the waitress head-bobbing his checkbook for that extra tip. When photo emerged of the team taken by the fat American lady at the next table, it was noted that Rider Howe had mysteriously dropped from the photo while reaching down to finger her belt loop.

Post dinner and listening to his senses, Rider Zinni hit the road back to the hostel in Rider Howe's hairdresser car, while the rest of the Ranch Rider crew followed Rider NewGuy across the square to a local watering hole to sample some highly recommend herbal local liquor known to loosen the bowels (for the following morning's absolutely vital pre-race dump). The problem was that Rider NewGuy kept ordering rounds, with another crushing herbal shot and then a local tap beer to wash it down. Ranch Riders were were pushed out at closing, only to find themselves lured into another local watering hole for a round of Wheat Beer. Again, faces turned, with a local gal in the corner especially interested, as the Rancher conversation drifted to Rider NewGuy convincing everyone in a rather loud and slurring banter of the merits of cornholling.

The morning of the race, Ranchers all awoke to a downpour of rain. Ranchers were to later learn at the race start that the long course was cancelled to to excessive rain and some snow. Several Ranchers reported near vomiting at breakfast when trying to consume grub on the back of the previous night's activities. In the end, all Ranchers rallied and found themselves riding down from the hostel to the start grid to slicing eagerly through consecutive sheets of hammering rain. Arriving with 15min until the start, much of the usual pre-race excitement was clouded by doubt around the extent of the downpour that proceeded to soak the bones and leave the shivers. While waiting for the start gun to blast, Rider Howe was even spotted trying to sit on his saddle in a (hopeless) attempt to "keep it dry for the race".

At the crack of 07:00, the loudspeakers roared and the riders were off. Puddles of water had turned into pools connected by streams. All Gimondi riders held their speeds down as the field nervously weaved through the streets of Bergamo out onto the course. Everyone was thinking about the recent death in the Giro and folks were being responsible, with the exception of a few serous douche bags who sped thru the pack.

The first climb was a welcome opportunity to try to warm frozen limbs and take a break from the wall of water shooting into Ranchers' faces that was streaming off the back tires of the riders in front of us. Thankfully, the rain eventually stopped 1hr into the race and the field began to spread.

Ultimately, each Rancher returned back to the finish line, victorious :

Rider Zinni : following two punctures and a broken chain, all within the first 30min of the race . . !, then getting lost (?) at a roundabout only to find himself back on the course, he finished arms raised as he sped thru the tape to take the checkered flag.

Rider Howe : was in the groove, had found a group of like minded riders and a pace of sheer speed and "atta boy" courage, only to suddenly look-up and notice that his crew had mistakenly chosen the short course. Nonetheless, Rider Howe was seen nearing the finish line out-sprinting all of his new found mates, and then jamming his air-pump into the last fella's wheel to secure a podium finish behind Rider Zinni.

Rider EzE : was triumphant to rise from the ashes, eat a few bites of his breakfast, dodge the tickle in the back of the throat begging for a post-breakfast vomit as his system was rebelling from a third consecutive night of heavy alcoholic energy drinks and sleep deprivation, only to saddle up to the start with a cool sense of calm. Rider EzE was later spotted in the finish line with his hand on the ass of the Avis Rent-a-car chick, and accordingly found himself up on the podium for a notable accomplishment, of sorts.

Rider NewGuy : was calm and collected having been the ringleader in the pre-race bar hop, to whizz through breakfast, shirk any form of extra clothing (not even a vest, arm warmers or a rain jacket) and start the race in only a shorty top, while the sky was raining cats and dogs. Rider NewGuy disappeared into the crowd to post a remarkable 4h25min for the medio course. The courageous effort prompted race organizers to create a fourth podium for yet again another Ranch rider to step up into the glory.

Rider Reido : was also seen concentrating hard to hold back post breakfast near full hurl following previous nights untimely bar crawl, but found courage sitting on the can for his third pre-race dump. Fluids flowing from all orphus holes, Rider Reido's shorts were already soiled and soaked before he hit the sopping streets to head off to the start grid. In the end, Rider Reido was noted for his courageous descending and perseverance to replace a blown-out tube, to sprint into a commendable podium finish.

In the end, the Ranchers all walked away satisfied that yet another Gran Fondo was universally conquered.
Posted by Reid Payne at 23:37 8 comments: