So I was chatting to NoShow today (by the way we are the only losers left in the RCL IB) and we decided that we all need a proper riding weekend in September. We both agreed that Lake Como is probably the easiest destination, great riding, easy logistic and stunning climbs. We could all go and climb the Ghisallo and ride around Lake Como. The place is stunning and the climbs are awesome. So if you are in just reply to this post and we will start organising...
Posted by riderzinni at 23:09 2 comments:

Wednesday, July 21…Rider Sharkbite finds a reference to the 40th annual Martigny to Mauvoisin cycle race on the Verbier website. A few emails later, the organisers are teed up to anticipate some Ranch presence on the weekend with Riders Howe and Lone Wolf on board, plus Howe’s visiting guest Richard (part-time resident of the nearby Grimentz valley). The French emails with the organisers establish that the Ranch should opt for the “classe populaire” category, starting from Le Chable at the base of Verbier. Apparently the Martigny start is for registered Swiss riders only, and is composed of elite and semi-pro riders (“whose times are about 1hr 15”…”tres, tres rapide”..that's "smmmokin' quick" to you and me.) 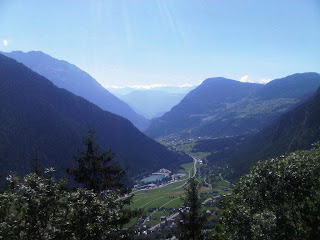 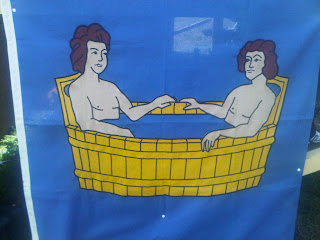 Flag of the Val de Bagnes…we like this spirit! Timeless image of a couple of medieval homies taking a load off in the hot tub. Equally applicable today, as a depiction of Lone Wolf and Howe discussing pro’s and con’s of alpine property ownership (in each case with the 70's rock star hair they wish they had) .

6.50 am Sunday July 25…The boys bundle up warm and descend from Verb to Le Chable. After the initial challenge of not being able to locate the pre-race registration point, they discover it in a café in the centre of the village. A good turn out of 70 or more riders are on hand. The team leave their backpacks and warm gear behind, pin their race numbers on, then get out and warm up the legs.

8am. Altitude 821m. Riders on their way. The boys check into the peleton for a nice opening drag up the gentle slopes of the valley floor. They know what lies ahead: 2 solid climbing sections, with a couple of short flatter sections after each, followed by a final third climb up to the Hotel de Mauvoisin (including switchbacks carved through vertical rock walls). The moment the first steeps begin, a pack of extra-hardcore locals are up out of the saddle and speed off. The Ranch drives on as riders string out.

9.05 to 9.20am. Altitude 1841m. The boys have all reached the finish and earned their reward: post-race coffees in the Hotel building to warm up. Various stories emerge...

Lone Wolf, just in from Colorado, was dogged by a weenie on his wheel for kilometres on end who then takes off when the finish line nears. The Lone Wolf would turn back and give him looks…but the dude would not share the load. He actually apologises to Lone Wolf afterwards. Lone Wolf’s civil but curt reply: “C’est dommage”—it’s sad.

Rider Sharkbite: nice even climb. Delayed by a downhill post-bus meeting three uphill cars in the middle of one-lane Lourtier, so he and others had to stop and wait. But that’s community racing. A hard grind all the way, trading the pace with a couple of locals over the final 5 kms. One of whom pulls beside and pats him on the back as they crank on through the final switchbacks. Ranch = Respect.

Rider Howe: nothing stops the Howe... 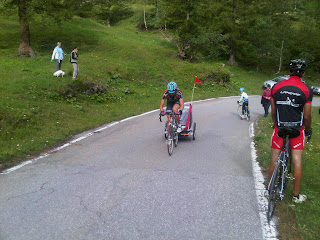 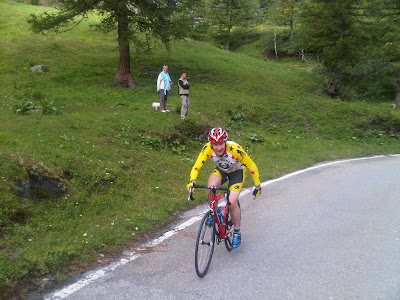 Because Rider Howe got a fargin’ big ol’ flat in Fionnay and cranked it up the final 3km on a 100% flat rear tire. (The actual Howe-quote accompanying this image is prohibited by Blogspot content guidelines.) Respect.


Richard checks in shortly after the Howe-machine. His Grimentz rides now put to good use in his first ever racing event. Primo.

After some truly excellent post-race coffees in the warmth of the Inn building, the boys watch the Elite riders start arriving from Martigny from their later 9am start. These boys can crank. Around 38km and 1400m of vertical in 1hr 17 mins by the winner. 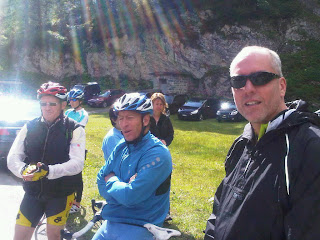 They’re all semi-pro or pro and on some pretty sweet rides. Juniors and Femmes in the mix too, with the fastest Junior arriving within about 2 mins of the fastest Elite guy. One of a bunch of juniors from some place called the World Cycling academy. Evidently a Swiss-based training academy for truly speedster grommets from all kinds of countries.

The boys absorb the scene. 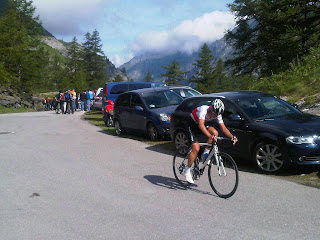 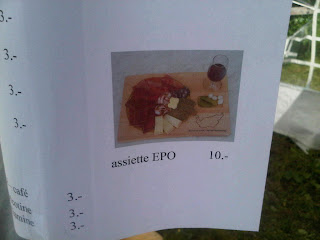 Last but not least, the boys trade in their free meal ticket for a plate of pasta. Or the alternative meal choice of a platter of cheeses and cured meats known locally as an assiette Valaisaine. But what’s this…

Maybe that explains why these locals are so fast!

Activities continue through the day, including a 4km pursuit climb race for the top finishers after lunchtime. The boys enjoy the sun and check out the demo by stunt bike guys hopping around on a parked car and various piled fork lift pallets. Crazy stuff. We could see pretty quick why these stunt bikes had no saddles. 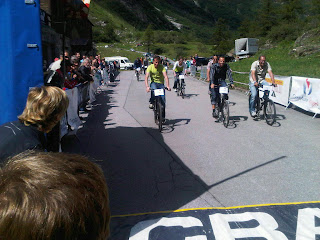 Next comes a little post-race VIP race event, on classic swiss bikes from the 50’s. Due to an organisational oversight, Ranch members were not invited to participate.

11.30 and the sun is shining. The team head home, enjoying a well-earned and stimulating descent to Le Chable and a ride up the telecabine to Verb. (Another shout out to CWA and the Swiss ski lift manufacturing industry. We love you.)

Overall a superb bike race that has been going strong for 40 years. Fantastic community event and slickly-organised race (except for that bus traffic jam thing), with locals all along the route cheering every rider as they pass. Most of the valley's residents are farmers. They know cows. They know sheep. And now they know the Ranch. 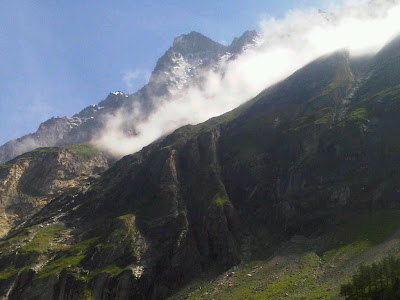 View of the east side of the valley, above the finish line. Nice dusting of fresh snow visible at cloud level.
Posted by Rider SharkBite at 12:09 2 comments: