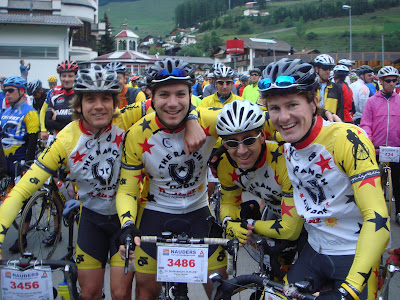 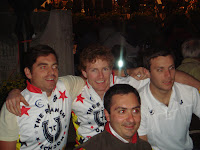 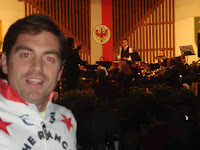 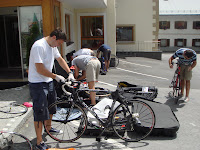 Arriving into munich airport after considerable delay out of heathrow - 7 ranch riders loaded up a rental van with bike bags and squeezed into a car for the 2 hour drive to nauders which is about 40k south of innsbruck. 3.5 hours later we slumped into hotel traube in pfunds - which for 29euro a night for an incredibly comfortable room with steam bath/sauna/and breakfast - stood out as fantastic value. Saturday we had a great little spin up to nauders to grab our race numbers and do some last minute tinkering with our bikes. We dominated some poor mechanic with Ridercrespo's new dura ace compact crank (with a cheeky 27) - which dan our bike mechanic in london couldnt seem to get to work properly. Actually, while our blog is full of shout outs and applause - dan the mobile bike guy sucks - and wont be seeing anymore biz - so there. Later, we hung out at the music tent - listened to some tunes - leered at the one girl in lycra - and kept answering questions if we were from london with "RANCH LONDON" plastered over our vests/jerseys/polo shirts/and socks. That night we feasted at the hotel - took in a community recital in the village square with tubas/moustache guys/and lots of oooompapa. We shaved eazy-e's argentine hirsute legs, ripped a whole lotta carboloadedfarts - and tucked in for a 5:00 a.m. rise.

RiderCali, RiderPitts, RiderEazy-E, and RiderChichi were in the first wave riding the long strecke (168K) - departing with 1400 of our closest friends with AC/DC's "highway to hell" blasting from the speakers and the village mayor whooping. The first 40k was a fast flat/with some downs - and the ranch was squarely up top - averaging mid 40's kmph until the stelvio - which seemed to appear out of nowhere. As we started europe's 2nd highest climb - everything seemed in order - cadence was in the 70's moving back and forth from a 23 and a 25. However, the first 20 minutes isnt really the climb - its kinda like when the herd of antelopes are lulled into a false sense of confidence as they hang out by the water hole with some lounging lions - then whammo. The wammo was a 48 switch back monster of 28k in length with 15% pitches scattered throughout. The toughest part was looking up and seeiing nothing but road crossing back and forth above your head. That climb never ended - and views - if you were able to find the energy to move your neck - were tier 1 - looking back into Italian dolomites - wow. Nearing the top cadence had dropped to the mid 50's spinning on a 27 - and as we summitted - snow bordered the road. Pausing at the feed station - we refueled - zipped up - and descended the other side - wonderful steep sweeping curves with the whole valley ahead. Leaving the scree above treeline - the descent took you down through pine forests - into elms - and finally the river valley. However, there were stretches of road that were gravelled which produced a littel moisture in one's chamois at 60kmph. The flats lasted about 20k - and just as the group was finding its form - we began to climb the second monster which was no joke either. Here riders were getting dropped everywhere - and our team was no exception. To make matters worse, at some point on the climb the shorter race merged with ours - so all of a sudden i got this "how is that guy ahead of me" shudder/panic - before i realized the kid with a backpack and steel fender had only been riding for 30 minutes. From the second climb on the race is series of rollers leading back into austria. On one of those rollers yours truly after taking a bunch of guff for sucking a little too much wheel - was forced to pull - and unfortuneately - yours truly descended at pace into a gentle bend - which included a transition from smooth tarmac - to rippled tar - resulting ultimately in yours truly going over the handlebars - wacking his rudy project helmet on a rock outcropping - and kissing that never really healed right hip with more road rash. Before i knew it the race marshall on the bend - which had played witness to a few crashes - had my bike up - chain on - and screaming "geht los". All in all i lost about a minute - but thank god for timing - and a quick group was right behind which i settled into and actually caught my old group - to a chorus of "what the f___" when i rolled up beside them. The finnish was a 12 hairpin up which the day before we did at 18-20kmh - the ranch struggled at about 12-14kph - and roared into the nauders - most of us in the top third - and a couple more in the middle. One rider that requires special mention is RiderZinni - who had a solid top half result - in his first major roadrace - crossing the line with his personalized colnago crystal with energy to burn.

Terrific race - incredible part of the alps, and we feel as always, very fortunate to be healthy enough to have the experience we did. Ranch rode well. France in 3 weeks.
Posted by riderpitts at 12:31 5 comments:

dreilander - ranch and the beast 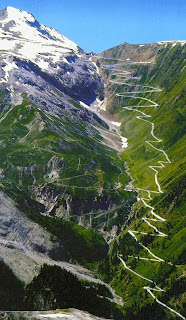 A detailed account of this past weekends race is sure to follow - suffice it to say - the stelvio pass - being the 2nd highest mountain pass in europe - 48 switchbacks - is just that - a beast. 4 ranch cyclists suffered, gulped, yelped, grimiced - and most of all loved it.
Posted by riderpitts at 18:05 4 comments: