Tour of Romandie CycloSportif–It’s Not Easy Being Green

September 11, 2011 dawns and another Bite/Howe Ranch adventure is upon us.  Riders SharkBite and Howe do not set their sights low: todays challenge is to equal or exceed Alberto Contador’s time for the Le Chable to Verbier climb, set in the 2009 stage of the Tour de France.

7am and SharkBite and Howe are in Bite’s rented station wagon, en-route to Aigle.  Today’s objective is the Verbier La Romandie Classic, a special event conceived by the organisers (and, as we’d soon see, the sponsors) of the annual Tour de Romandie pro UCI race.  It would be a cyclosportive with a difference: start with 90 or so kms of cycling in a marshalled and escorted peleton (cruising beside the vineyards and fields of the Sion valley floor), rise gradually from Martigny to Le Chable, then—upon arrival in Le Chable—hit the first timing station at the base of the climb and let the demons rip as 500 or so riders do their best against the clock to pound it up to the Verbier finish line.  Not your usual format, and it produced some interesting experiences.

Howe and Bite pulled up to the suburban retail zone parking lot where the start was taking place and headed to the pre race registration area (which turned out to be inside a large 5 storey gymnasium kind of building).  Everything went smoothly, with both race numbers and freebie gift bags and jerseys being obtained with typical Swiss efficiency.  The usual next step ensued: Ranch riders searching out and evaluating toiletary facilities.  It was while waiting for Rider Howe in the hallway for a few minutes that an important realisation dawned.  In a concrete alcove all along this hallway there were bicyles stored in racks.  But Sharkbite noted that these were not road bikes for today’s event: they were track bikes.  It was at this point that both riders realised that when they registered at tables set up in the large open floor of this round gymnasium type building, they were not (as they had unconsciously assumed) in some generic conference centre space.   This place was a full on bad-boy velodrome…in the middle of Aigle Switzerland!!!  This of course started to make more sense in the context of the UCI Cycling Academy being about a mile away, closer to the centre of Aigle. (An institution riders Howe and Sharkbite were only too familiar with, given the tendency of a small group of UCI academy juniors to show up at the Martigny Mauvoisin race and comprehensively blow away the field…and the hopes and dreams of your hapless Ranch brethren.)

The organisers were requesting that all participants wear the green Vaudoise assurance jerseys given to the all the riders, but Howe and Bite had other plans: the colours they displayed today, would, as usual, be black, white, red and yellow.

Learning from the Gruyere experience, Howe and Bite arrived at the start area in good time and managed quick vaults over the barriers and into the start area (when the burly Swiss man charged with controlling the start group size had turned the other way to bellow at some other dude who got caught doing the same). Although Howe and Bite couldn’t see it at the time, up ahead the full escort and cavalcade of motorcyle marshalls had formed. 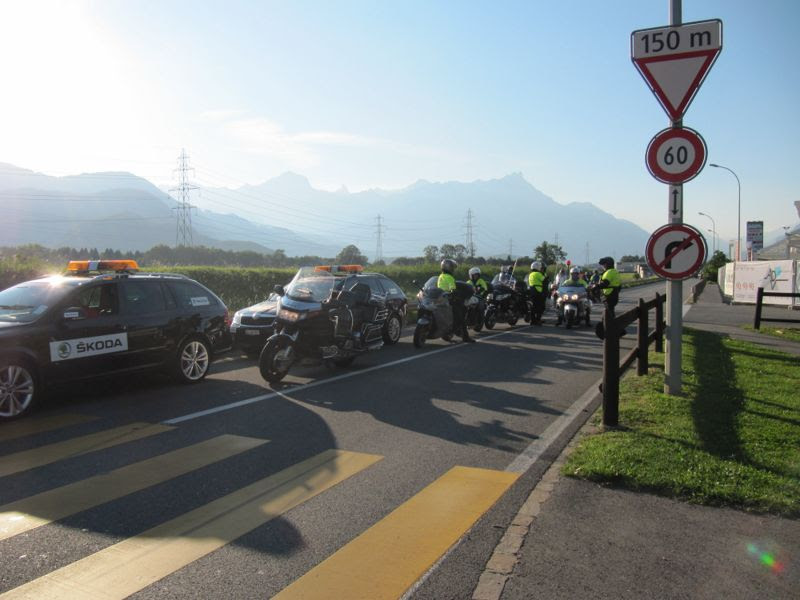 …And our leather-clad pals from the Valais Motorcyclers Federation.  Respect.

Yup, we had a great big convoy…and she was a beautiful sight.

Howe and Bite slotted comfortably into a mid-peleton position in the long, snaking sea of green jerseys and sat back to enjoy the tour of the flatlands.  They knew what their only priority was: conserve energy.  And on this beautiful day they had about 498 available humanoids (sitting atop a wide selection of the best bicycle technology out there) to choose from, like they were put there specifically to help Howe and Bite achieve their plan.  Even better, quite a few of these other humanoids were sized and shaped to provide maximum headwind-sheltering benefits to anyone behind them.  God bless the chubby, Swiss weekend warrior: we like the way you roll (as long as you do it in front of us, not beside us).

It became clear pretty quickly that this phase around the valley and on towards Le Chable was not going to be like any “normal” event.  With it not being a closed-road event, for safety reasons the Swissies wanted the escort to hold the peleton in one long pack (and to keep it on the right side of the road only).  This meant that permanent vigilance was required, because even though the peleton was half a kilometre long, there were immediately accordion effects every time the front reached any incline, roundabout, or negative change in velocity.  All of a sudden, hands of riders up front would wave, the squeal and smell of brake pads on carbon would break out, and Howe and Bite would have to drop half their velocity and be careful not to impact riders in front.

Despite this challenge, things passed smoothly.  Totally clear skies, warm temperatures, views of the mountains, fields and vineyards…and locals lining the way all along the route to clap and cheer.  This wasn’t racing, but it was a training ride like no other.

There were only a couple of deviations from the energy conservation goal during this 2 hour period.  First, Bite and Howe both simultaneously felt the need to urinate on the Swiss countryside.  There were two dangers inherent in this: 1) Not getting slammed by some dufus from behind as you pulled off to the side of the road and stopped, and 2) the obvious: re-joining the peleton once you were a couple of minutes off the back.  Howe and Bite executed successfully and quickly on satisfying their biological needs and were able to power back together to reach the whirring green peleton beast.  A burst of effort that provided a welcome stimulation and prep, by getting the heart rate up.

The second energy expenditure came in the gradual climbing section from Martigny to Le Chable.  The riders stuck religiously behind others, but found themselves nonetheless moving gradually forward in the pack, as heavy riders moved into slower relative speeds once climbing a gradual slope.

But with around 3 hours down, the duo duly rolled into the last couple of kilometres to Le Chable.  SharkBite narrowly escaped a peleton wipe out on the gradual climb from Sembrancher, when a rider to his side lost his pedal, bumped Bite and Bite bumped the guy on the other side.  A close one, but no one went down.

Coming into Le Chable, it was time to move into stage 2 of the race plan.  SharkBite pulled over beside a field and reduced his bodily fluid burden.  Howe pulled into the food station before the final climb.  Both of them knew what was coming next…

And of course, while we were doing a lot of that, we weren’t really able to enjoy much of this… 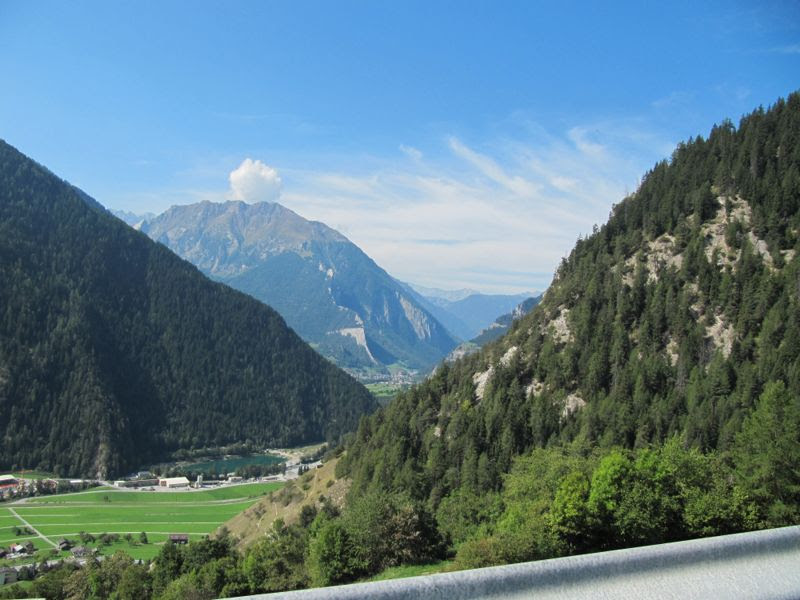 Alex Moos of the BMC mountian bike team brings it home in a winning 24:56 time for the climb. 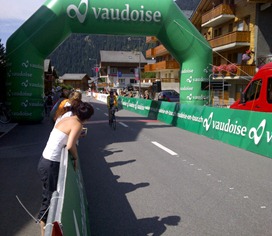 Rider Howe brings it home in a hard fought 44:52, pushing through an energy crash and the midday heat. 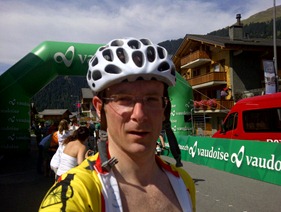 SharkBite, oxygen starved and confused, wonders what the numbers 36:24 mean, where he is and what he is doing there…and takes a photo of himself in the hope it might help him figure it out some day. 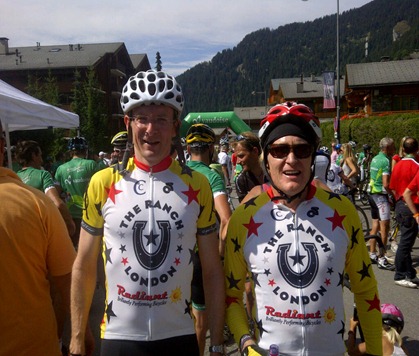 In a sea of green, the Ranch is duly represented.  Rider Dazed (L) and Rider Confused (R) absorb the sweet, sugary taste of energy replenishing beverages.  They smile at a job well done.  And they smile because they know the secret weapon to beat Contador’s time by 50% every time, with no performance enhancing drugs or doping required…

Alberto, eat your heart out.  And enjoy those preserved meats, by the way. 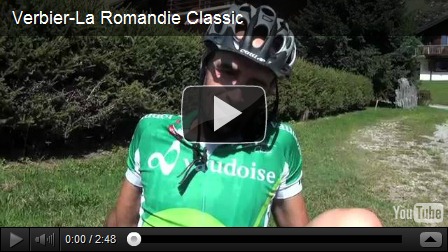