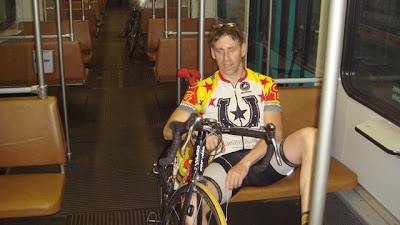 Finding myself spending more and more time in our frankfurt office - i often get the response "poor you" "isnt that the most boring town in europe". Maybe they are referring to the club scene - which i cant comment on - maybe they are referring to the bar scene - which i cant comment on. But what i can say - is if you are a rider - the kind of rider which gets a bit jumpy if his legs are idle for more than a couple days - then frankfurt is your place. I can take a subway from the middle of frankfurt a mere 100m from our offices 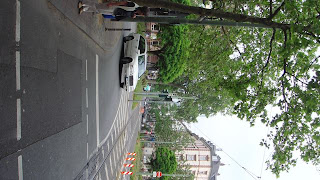 - and be dumped 25 minutes later at the foot of a 45 minute climb in the middle of the forest. On that exposure you get very little traffic - a ton of mountain bike guys zipping up groomed single track - and perfect blacktop for the roadie. 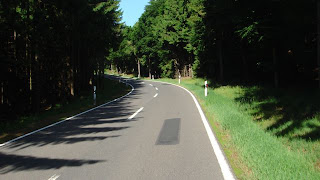 The climb tops out on the summitt of the felberg - which is the highest point in the taunus. 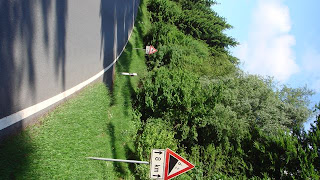 Thus the riderpitts knocks off 2 climbs and is home in bed by ten - you tell me - who is playing for second place.
Posted by riderpitts at 08:36 5 comments:

.. only three weeks to go to Nauders.... morale is low and fitness level is low... horrible back pain but all in all spirit is high ... no riding this w/e for me as I will be away but I will be riding in the Peak Districts next w/e .. I am really looking forward to climb the Stelvio .. not sure why.. it will be tough... very tough .... http://www.wired.cz/cyklo/images/Swiss/Stelvio.jpg
I kind of like this blog stuff...
Posted by riderzinni at 20:10 1 comment:

The start wasn't great with rain pouring down... We started at 08:30 and for the first half hour the rain didn't stop... then it finally stopped and it didn't rain till the end... This course is challenging and I know the Chilterns are not the Alps but the number of hills that you need to climb really kill you... I didn't count them but i guess you are talking of at least 15/20... most of them similar to "la subida de la muerte...." I missed the first food station (it sems like everyone else did as well) and we all arrived at the second (and final station) starving and w/o water... Stopped for five/ten minutes to get some food on and drink some water and move on.... then the disaster happens... near Turville in a tiny little country road I had two cars in front of me and another care coming on the opposite direction... The two idiots decided to stop and I was flying down ... tried to stop but the gravel didn't help and I crashed.... It took a bit to recover then got myself together again and rode till the end... It has never happen to me before ... it was painful and I still had 30 miles to go ... so I joined another peleton and I even managed to chip in a sprint in the final 3miles of the course and pulled the peleton to the end... All in all a good course but I think more challenging than the Prosecco race.. I think the ranch should be there next year in full... See you in Nauders...........
Posted by riderzinni at 07:35 2 comments: