What a weekend. The Ranch is alive. 4 from London, one from Paris. Milan Linate airport.

Noshow the first one in, waiting and having a coffee machiatto. And why not? The guy's in Italy. Was delicious.

After a 30 minute wait, 3 more come waltzing out of Terminal A (there is no B), gulp a few Italian sandwiches and off to find the van to transport the team to Bergamo. It was 9:30am. Well done Ranch.

RiderChiche shows up like it's gameday. He is skinny, shaved, has a plastic cover over the rental van details and breaks into argentine accented italian as he speaks with the rental woman. UPennWharton indeed. This guy was prepared. Noshow observing began to get butterflys wondering what other kind of preparation he had done. Rollatoke never got him that far. 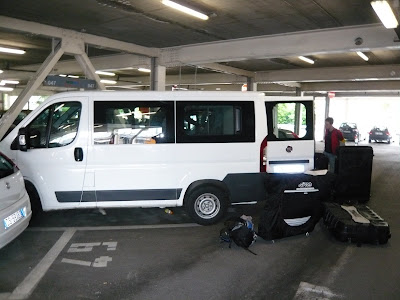 The van was perfect - Chiche as driver (normal) and 30 minutes later we were pulling into Bergamo looking for the Hostel. Yes - you read correctly - Hostel. (Claim to fame is best Hostel in Europe.) To be fair - we will go back - they were superb. And not least of which the bus went directly from the hostel to Citta Alta. Which was discovered much too late by TeamRanch but soon enough to enjoy one ride back from the resto saturday night.

We began the saturday by a spin over to the stadium to check in. The same issue with having no insurance - Cali gives his telephone number as insurance card and adds a number. Zinni changes the last number of that to 1 additional. Ok, then Noshow gets stopped and Zinni proceeds to explain that all of our insurance numbers are the same except for the last digit which goes up by one each time. Ok, sign the back of the paper saying you won't sue us. Done - race numbers and chips in hand we roll out of there surrounded by massive amounts of bike porn. The Ranch wasn't distracted. We had business to take care of. First up - The Giro d'Italia was making a showing in Bergamo that day. So we spin down the road getting waved on by spectators and policia alike until we were stopped and told no further. A glance at the team cars and lunch in a cafe on the side of the road with one of Gimondi's old friends was a treat. The riders came through like a pack of sinew about 35kph looking relaxed. They had just picked up their 100km snack and were replacing calories.

A few minutes of that and we were back off to the hostel to shower up and see if we could catch the finish in town. Hostel room - 4 bunks beds - room for 8. We were 5. One shower with no curtain, drain in the floor and the toilet basically in the shower with you. Normal? 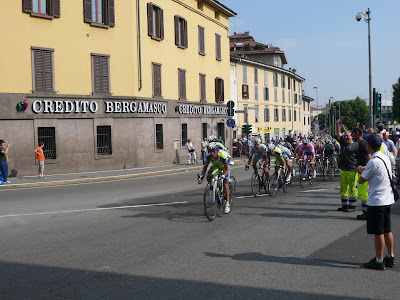 After the clean up - we walk into town, see the riders come flying through on their way to the finish and head up to Citta Alta for some sights.

A bit of Terrone cheese and hams, a small beer, a few photos, dinner at the Ranch restaurant where we ate last year and bus back to the Ostello. Who do we find - but SpeedoRedio out doing hill repeats on his new Derosa King. A good look at his new ride and we are lights out by 10pm struggling to fall alseep but distracted by RiderCali dryshaving his legs.


After a hazy sleep of strange dreams, the sounds of snoring vibrating throught he halls, the Ranch had multiple blackberry alarms rouse them around 5:30 am. 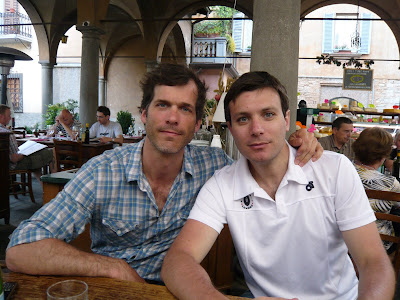 Trying to negotiate 5 men for the SS and S before the race was interesting but accomplished and we drift downstairs to find any breakfast there might have been earlier completely torn into and gone. We satisfied ourselves with warm milk and a dry roll each and looked forward to getting on the bike. We could eat at the second food stop.

A line up with 2,500 other cyclists and within 20 minutes we were off.

Now Cali had clearly stated he was going to be on the rivet from the start to the finish so noshow decided to relax behind him and let him negotiate the crowds in the beginning. Reido drifted back into the pack clearly afraid to scratch his new ride (various shouts were claimed to be heard - YO! EASY ON THE BIKE! HEY! TOO CLOSE! GIMME SOME SPACE)) and Zinni waited for Chiche so they could ride support for each other.

Cali and noshow lead the pack up hill number 1. Zip along to hill number 2 and first Noshow rides away from Cali, then gets passed by Speido. Noshow stops for some water refills, eats a cookie and Cali comes spinning in. A quick refuel and water and off they were again on the course. Reido GONE. Lone wolf. Zinni behind us drops Chiche and waits at the water stop for him to arrive. After already waiting for him to change a flat earlier in the race and sharing his water bottle as Chiche forgot he would be thirsty and didn't fill his own(Wharton? nah) Zinni is expressing one of the Ranch qualities...take care of your fellow rancher. Generous to say the least. Chiche descending better than Zinni so he is waiting at the bottom of the hills so they can continue their ride together. More on this later...

So Reido is off and trying to improve of his time from last year. Cali and Noshow battling it out on hill number 3 which is really a double whammy. Cals tries to drop the noshow early on and kicks it into high gear while noshow could only watch him go confident of being able to catch him before the top. Zinni and Chiche playing cat and mouse and chiche descending to the bottom after the 3rd hill only to forget about Zinni and make a break for home conveinently forgetting the team spirit Zinni had exemplified.

Meanwhile, Noshow catches Cali and hides on his wheel for a few minutes before attacking 4 km from the top of this final climb. He gets a healthy 30meter lead and cannot keep the pace so sits down and glances back to see Cali's face go from an expression of panic to an expression of fistpump smugness knowing Noshow can't get away.

So 2 of the 3 parts of the team head for the finish. ReiderSpeidoReido turns right for the long course and crushes it. 5H50 minutes improving by a healthy 30 minutes from 2008. All those Verbier weekends paying off. Cali and Noshow head full gas for the finish and Cali skids through the last turn with one foot on the ground Barney Rubble style at about 40kph and head up sprints for the line, Noshow spins across 2 seconds after followed by the Italian train who helped pull us in.

Chiche is next across with Zinni pulling up a few minutes after muttering something uninteligible in italian while giving chiche the evil eye.

Reido being the anchor rider comes in a few minutes later after doing the long course with a fantastic time while swearing under his breath, "Flipping Terrones, stay away from my bike..."

So at the end, the Ranch meets back up at the hostel, has a shower, packs the van and stops off for one last bite to eat in Citta Alta Bergamo, Italy before heading back to the airport. It was a meal of 5 tired guys feeling really good about what they accomplished that day and patting each other on the backs - even if there may have been a bit of fun-poking at one another. All in good fun and victory for the Ranch. Thanks Roy Yan. You have created something special.

Photos to be posted this weekend.
Posted by RiderNOSHOW at 10:11 5 comments:

Goin' Back to Cali This past weekend, a three-strong contingent of the Ranch cohort made an appearance at the Encinitas Triathlon. Located in surfer's paradise, just north of San Diego, where the sport of triathlon was born of Navy Seals in 1974, Ridermama, RiderZoe and Riderturbo (Turbine) appeared smiling brightly and proudly flying the Ranch colours.
Preparing for the event was not easy. Turbine solicited inspiration from the Oracle (RiderPitts) some half-the-world away in Hong Kong to drop pounds, lean up and get ready for race day, incorporating a regimen of austere diet, aerobic base building and Friday fasting to throw down when the chips were on table.
Despite teeming with a hunger to race, Ridermama was relegated to spectator with Riderzoe due to some group planning issues.
Wanting to take glory for the team, Turbine lined up front row behind the start tape with the big guns in a land where triathlon is no joke. Fueled by a pre-race regimen of Red Bull, push ups and delusions of Ranch victory, Turbo flew off the line like a trackstar and was first into the water with high knees and powerful arm drive. 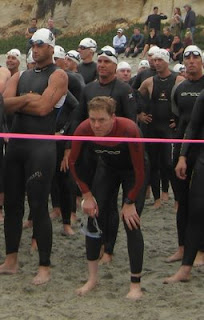 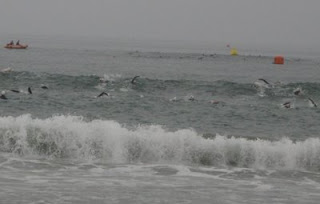 A few seconds later, the dream was shattered as Turbine slammed head-on into a wall of incoming surf where mother nature shows no quarter to feeble displays of human aggression. After regaining composure, Turbine settled mid-pack among local ocean swimmers and swung into a rhythmic corkscrew tempo reflective of weekend race pace. The group swam straight outbound to the yellow triagular buoy, smoothly sighting intermediate orange buoys past the break, then turned shore bound by sighting off a towering palm tree onshore to complete the 750m swim leg.

Mentally discombobulated coming out of the water in 37th place, Turbine knew it was time to show the locals what the Ranch is about. After an extra 30 seconds fluff time in T1 donning the obligatory Ranch jersey, hell broke lose as Turbine locked, loaded and fired the Eddy Mercx Chrono TT bike down the road course, sighting the competition and picking them off one by one. After two laps comprising 20km, Turbine had restaked Ranch claim with a non-drafting bike split 37 minutes, ranking 7th amongst men same-age group competitors.

On to the run after a snappy one minute T2 and Turbine felt the pain of hard-won glory on the bike. Despite efforts to ignore the pain, lactic acid spiked and leg muscles seized as Turbine grit his teeth and knocked down the first of two laps. Inspired by fast veterans, fit women and Romanov's Pose Tech running technique, Turbine picked up the pace and brought home the second lap of the 5k run in style with Riderzoe and Ridermama providing paparazzi photos and raucous cheering along the finish line chute.
Overall, Turbine clocked a mid-rank 5k run split and won 14th overall position out of 63 competitors in the Men's 35-39 age group. 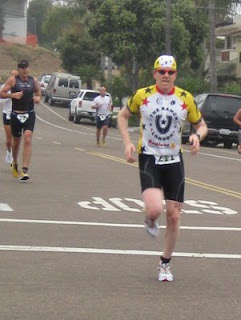 Ridermama and Riderzoe proudly showed Ranch colours throughout and curious onlookers in the crowd were heard whispering "who's the Ranch?"
Chalk up a few more kilometers, smiles and points for the Ranch on the global racing scene.
RANCH HUSTLE, LOYALTY, RESPECT.
Posted by riderturbo at 17:02 6 comments: