Precision flying requires coordination, commitment, concentration and focus.
...Facts that the Lone Wolf and SharkBite were fully aware of as they rolled out onto the Verbier roads at 8am, Sunday, April 25. Patrouille de Glacier weekend (hence the formation flying display) in Verbier, with the town over-stocked with wire-thin, alpine-touring aerobic-meisters--fresh from their 4000m and 30+km ski tour race from Zermatt to Verbier on Saturday. Time for the Ranch to respond in kind: marathon man Crespo in London, a strong contingent at this weekend’s Gimondi…and now, for the first time ever, SharkBite representing in his stylish, new Ranch long-sleeve jersey (thank you NoShow, size L is sweet) AND rolling with the LoneWolf while doing so.
Meeting at the local convenience store, LoneWolf took the opportunity to supplement his fetching new orange Campy long-sleeve (see photo below) with some carefully chosen newspaper sections (spotted languishing on the outdoor post-box). Ready for the upcoming 8km and 700m of chilliness, the boys roll out. Or were they ready? Outside Migros SharkBite bisects a particularly profound pothole and suddenly hears the unique sounds of a plastic object sliding at 25mph on dry asphalt. The blackberry? No. Instead, a handy-dandy Scott water bottle is recovered...with fresh road rash and extra mineral particles. Mmmm.
Descending carefully down the nearly empty road, our dangerous duo convenes at the base of the climb, strips down layers and plots the itinerary for the morning’s adventure. Wolf sheds the regional sports pages. SharkBite reaches down for some re-hydration…and finds an empty bottle cage where the scuffed Scott bottle was supposed to be. He quickly realizes that the loud slapping sound when he hit a pressure joint on the descent was in fact the sound of something happening. Scott water bottle, R.I.P. Good thing he has another one. And time to change that bottle cage.
Pooling their knowledge of the plentiful roads and climbs of the Val de Bagnes, Wolf and Shark promptly cook up a special double col assault…and return to the road. Heading northwest down the base of the valley, the team soon turns right and strikes out uphill. Through the towns of Vollege and Levron, the Col de Lein was the first strike target.
The boys immediately shift into side-by-side formation on the empty roads, jet fighter stylee. The first order of the day for Ranch-riders then ensues: mutual updating on each rider’s portfolio of chronic and recurring bodily ailments. Wolf rides strong despite cycling-induced tendonitis in the patellar tendon: pain is illusion, the climb is reality. Shark feels the ski-touring induced inflammation on his left heel bone (ultimately attributable to the handiwork of his favourite Albanian criminal driver), but expects it won’t be too problematic in cycling shoes.
Soon the riders are enjoying stunning balcony views of multiple valleys in superb Sunday sunshine, with the Grands Combins to the south and Mont Blanc to the west. Truly awesome…and a welcome anti-dote to the suburban flatlands of South-East England.
The riders know they are operating at the same and higher altitudes then the precision fighter jet-flying of the day before. Hypnotised by the whirring rings and chains, they press on. Missile lock: Col de Lein summit.
Transitioning to a hard dirt road surface, the duo complete the 700m ascent and prepare for the anticipated surface challenges of the north-facing descent on the other side: spring is here, but in the mountains our friends Snow and Ice take their time leaving. Navigating the occasional muddier sections (post snow-melt), Shark and Wolf hoist their bikes and pick their way through several lengthy snow and ice sections. 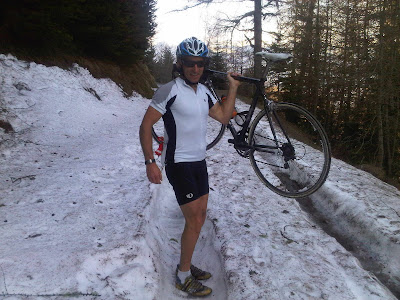 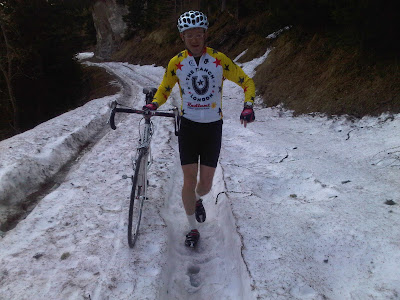 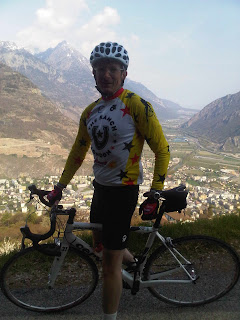 Commitment!
The descent then resumes, but not without a brief pause for Shark to obtain an appropriately pointed rock and chip away the solid ice block in his Speedplay cletes. Clipping and unclipping becomes un-smooth and tricky with the addition of snow, dirt and forest fragments to the rider’s pedal cletes. But soon the duo is back on tarmac, descend down winding roads towards Martigny…and more stunning views ensue. 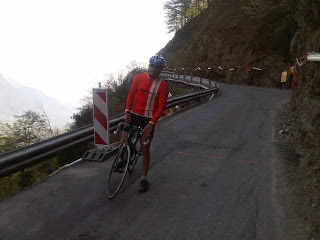 They pause for a review of some particularly impressive engineering operations to restore the outer half of the roadway…which was obviously tearing as it slowly slipped down the hillside over time. Shark notices that this is one of several disturbingly steep sections…maybe it’s time to switch out the standard cassette for something a little more climb-friendly.

After a quick break at the bottom (snacks and bodily functions), the two bikes are back in formation and jamming up a particularly steep start section. Elevation 500m…only about 900 more to go.
A solid climb ensues. Shark pulls out a little through the steep construction section, unable to make any uphill movement other than by getting out of the saddle and cranking the pedals in the smallest gear he has, just to keep them turning. Soon the duo reconnect and Wolf presses on. Shark looks enviously at the Wolf rear cassette as it recedes into the distance in front of him. Wolf puts down a steady and masterful ascent.
With 55 minutes elapsed and target two successfully acquired, Shark and Wolf grab snacks at the top of the Col des Planches and descend down the silky smooth road on the other side to the valley floor. A few km’s along the valley to Le Chable and now the boys reveal the smartest part of their plan:
Instead of this... 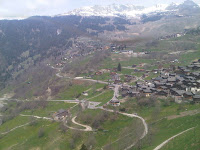 They take advantage of this... 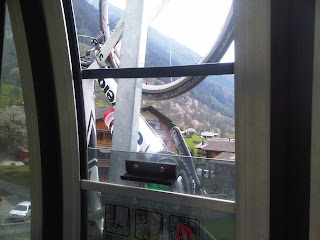 This is a big shout-out to Doppelmayr, CWA and the entire Swiss ski-lift design and manufacturing industry! Taking skiers to slopes and pilots to home base. We love you, man.
Another awesome day, exploited to the full by Ranchers worldwide…and a couple in Switzerland too.
Posted by Rider SharkBite at 11:46 3 comments: