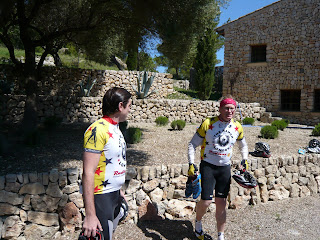 3 sections of Team Ranch came to Palma de Mallorca.  2 from Zurich, 2 from London and one from Paris.  Marion, our polish friend who takes care of the property was kind enough to be transport guy all of friday finishing up by picking up Noshow at 12:30 am and proceeding to speed across the island as fast as the giant Hyundai van could go and arriving home at 1:15 am to find the house........empty.  Odd.  Oh wait, there were argentines with us.  A quick phone call and we find they are at a bar in Alcudia.  Marion, happy to help, drives Noshow into town and decides to have a few beers as well while explaining in broken english, "don't tell my girl..."  Although it seemed the pressure got to him and he split after 2 beers and a Jaeger shot.

After a late night, bed around 2:30 am and a few Jaegermeister and tequila shots (no idea why), the ranch slept until 11am Saturday when Noshow awoke and banged on bedroom doors to wake everyone.  Brekky, a peruse at the map and into the van and with Crespo the chauffeur, we were off to Pollenca to ride the mountains. 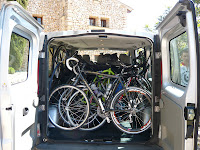 A nice start to a 3 hour ride, we roll as a team for the first 10 minutes until the rode turns up.  First off the back, Pablo the chauffeur.  Noshow drops back to give him the keys in case he loses morale (more to this later) and works for the next 15 minutes on trying to catch riderCali.  On his way, he sees Zeke, looking ok but frustrated, then riderHowe looking very comfortable, then finally reaches riderCali looking relaxed spinning up the mountain.  NoShow, about to his limit is relieved to sit on Cali's wheel for a spell to catch his breath.

RiderHowe closes the gap to Cali and Noshow, and the 3 of them climb and climb worrying about the impending thunderstorms.  Dark and threatening on the left, blue sky to the right, the 3 ride until they go through the darkest tunnel in the universe only to come out on the other side to a cold, windy, dark, rainy world where they look at each other and agree to make the turn.  Back through the tunnel


and into a good decent.  Pollo is only a kilometer or so below them and then Crespo not far below him.  We zip past Crespo who doesn't turn.  Noshow decides to turn to get him, chases back up the mtn to where Crespo says,"I will not turn back until I go two hours.     I have 4 minutes left."   I find this a great example of a man versus himself.  He had nothing to prove to anyone except himself.  Fantastic effort.  I wanted to hug the man.
A 30 minute decent back to the van with speeds approaching 65kph on the winding road, a hard headwind at the flat and Cali, Noshow and Howe rest in the sun while awaiting their Argentine teammates.  Within a half hour, everyone arrives feeling fantastic with a deep hunger and the Tapas bar is calling....Cali, having returned from a training weekend in Tenerife is dark skinned and looking like he went native.  Pollo showing off the colors and RiderHowe being as strong as the Team has ever seen him sits there with confidence and doesn't have to say or do anything.

A stop off for something to replace the calories lost along with a team photo:

Then a 15 minute drive back to the Mallorcan Ranch base of operations and the team decides to shower up (Pollo and Noshow detour for a chilly dip in the pool) and a discovery of a ping pong table leads to a good hour of friendly round robin competition.  Weak link was clearly Cali's hand eye coordination.  Strongest on the table were the argies. 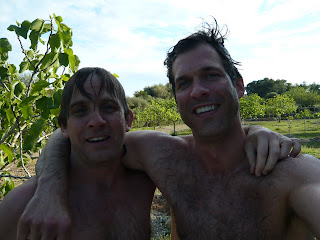 After a team tasting of riderHowe's outstanding Mount Gay and cokes, the team was lubed and ready to have dinner.  Crespo driving as per usual, into Port de Pollenca for some local flavors and we are snoozing by midnight, dreaming of carbon, the clunk of gears shifting and the hiss of tires on asphalt, looking forward to another day of cycling.


A much earlier start on Sunday vs Saturday and the team decides to repeat the ride from Saturday due to time constraints.

Overall a beautiful day with plenty of friendly competition on the hill.  Noshow tries to huddle the team up at the top but Cali was having none of it (grumpy for being dropped) and Pollo was still in his own world although rumour has it that Crespo caught and passed so perhaps was feeling like he needed a bit more punishment.
After everything we all met back at the van then to the house again.  It was a fantastic weekend with lots of laughs, plenty of good work put in in the mountains of the northwest corner of Mallorca.  All in all, Team Ranch London is winning so far this season.  The first race in Bergamo, Italy is upon us in 3 weeks.  Felice Gimondi.  I sense victory.  This weekend certainly was.